The default controller to drive the car with your phone or browser. This has a web live preview of camera. Control options include:

If you bought an RC car then it might have come with a standard 2.4GHz car radio and receiver as shown in picture below. This can be used to drive the car. 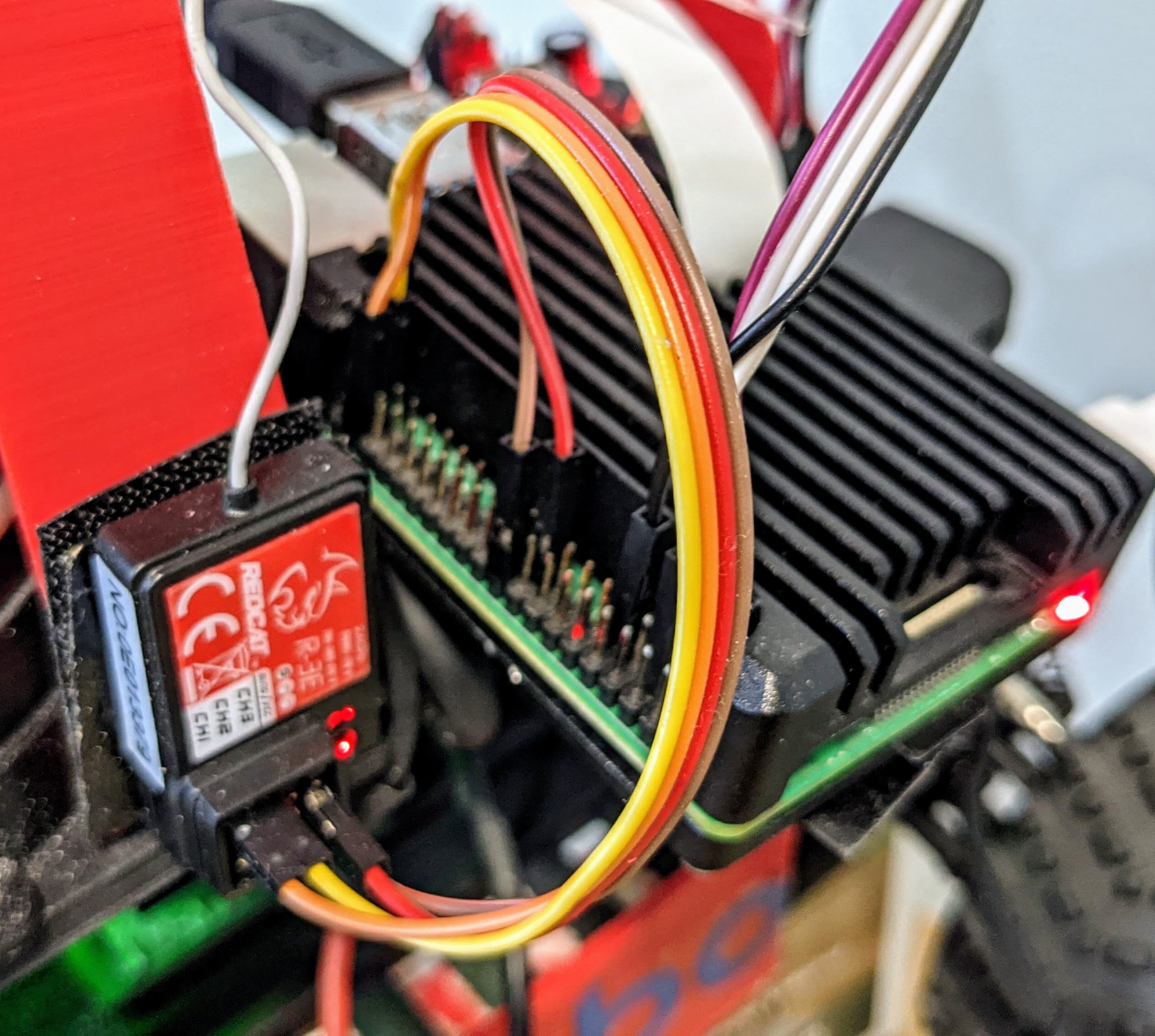 You can also use the RaspberryPi pins to output directly to the car's servo and motor controller, without the need for an I2C servo driver board. A full tutorial on doing this is here.

Many people find it easier to control the car using a game controller. There are several parts that provide this option.

The default web controller may be replaced with a one line change to use a physical joystick part for input. This uses the OS device /dev/input/js0 by default. In theory, any joystick device that the OS mounts like this can be used. In practice, the behavior will change depending on the model of joystick ( Sony, or knockoff ), or XBox controller and the Bluetooth driver used to support it. The default code has been written and tested with a Sony brand PS3 Sixaxis controller. Other controllers may work, but will require alternative Bluetooth installs, and tweaks to the software for correct axis and buttons.

These joysticks are known to work:

These can be enabled by finding the CONTROLLER_TYPE in your myconfig.py and setting it to the correct string identifier ( after disabling the comment ).

These can be used plugged in with a USB cable. It's been much more convenient to setup Bluetooth for a wireless control.

There are controller specific setup details below.

Change myconfig.py or run with --js

Will enable driving with the joystick. This disables the live preview of the camera and the web page features. If you modify myconfig.py to make USE_JOYSTICK_AS_DEFAULT = True, then you do not need to run with the --js.

Follow this guide. You can ignore steps past the 'Accessing the SixAxis from Python' section. I will include steps here in case the link becomes stale.

Reboot after changing the user group.

Plug in the PS3 with USB cable. Hit center PS logo button. Get and build the command line pairing tool. Run it:

Use bluetoothctl to pair

To test that the Bluetooth PS3 remote is working, verify that /dev/input/js0 exists:

In case the BT connection on the Raspberry Pi does not work, you see might something like this in bluetoothctl:

Try updating the Linux kernel and firmware by running:

For some reason, they don't like to charge in a powered USB port that doesn't have an active Bluetooth control and OS driver. This means a phone type USB charger will not work. Try a powered Linux or mac laptop USB port. You should see the lights blink after plugging in and hitting center PS logo.

After charging, you will need to plug-in the controller again to the Pi, hit the PS logo, then unplug to pair again.

Sometimes these controllers can be quite old. Here's a link to a new battery. Be careful when taking off the cover. Remove 5 screws. There's a tab on the top half between the hand grips. You'll want to split/open it from the front and try pulling the bottom forward as you do, or you'll break the tab off as I did.

Sometimes when you plug-in the PS3 joystick it starts taking over your mouse. If you want to prevent that, you can run this:

The following instructions are based on RetroPie and ds4drv.

Running on your pi over ssh, you can directly install it:

If you see Failed to create input device: "/dev/uinput" cannot be opened for writing, reboot and retry. Probably granting permission step doesn't take effect until rebooting. Some controllers don't work with --hidraw. If that's the case try the command without it. --led 00ff00 changes the light bar color, it's optional.

Press and hold Share button, then press and hold PS button until the light bar starts blinking. If it goes green after a few seconds, pairing is successful.

Run ds4drv in background on startup once booted

Save and exit. Again, with or without --hidraw, depending on the particular controller you are using.

To disconnect, kill the process ds4drv and hold PS for 10 seconds to power off the controller.

This code presumes the built-in linux driver for 'Xbox Wireless Controller'; this is pre-installed on Raspbian, so there is no need to install any other drivers. This will generally show up on /dev/input/js0. There is another userland driver called xboxdrv; this code has not been tested with that driver.

The XBox One controller requires that the bluetooth disable_ertm parameter be set to true; to do this:

Once that is done, you can pair your controller to your Raspberry Pi using the bluetooth tool. Enter the following command into a bash shell prompt:

That will start blue tooth pairing in interactive mode. The remaining commands will be entered in that interactive session. Enter the following commands:

That last command will start the Raspberry Pi scanning for new bluetooth devices. At this point, turn on your XBox One controller using the big round 'X' button on top, then start the pairing mode by pressing the 'sync' button on the front of the controller. Within a few minutes, you should see the controller show up in the output something like this;

Write down the MAC address, you will need it for the following steps. Enter this command to pair with your controller:

where YOUR_MAC_ADDRESS is the MAC address you copied previously. If it does not connect on the first try, try again. It can take a few tries. If your controller connects, but then immediately disconnects, your disable_ertm setting might be wrong (see above).

Now that your controller is trusted, it should automatically connect with your Raspberry Pi when they are both turned on. If your controller fails to connect, run the bluetoothctl steps again to reconnect.